You are here: Home / The Economy / Find A Mortgage Rate Strategy Ahead Of Friday’s Job Report 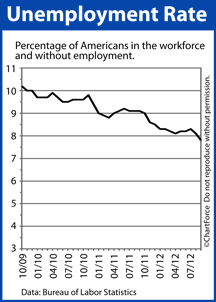 Economists expect that employers have added 125,000 net new jobs to their payrolls in October 2012, up from September’s tally of 114,000 net new jobs. Jobs have been added to the economy over 24 consecutive months leading into Friday’s release, and approximately 4.7 million jobs have been created in the private sector since early-2010.

So, what does this mean for home buyers and refinancing households throughout Hooper ? It means that mortgage rates may get volatile beginning tomorrow morning.

Improving jobs numbers tend to push mortgage rates up, as it signals to investors that the U.S. economy is strengthening. If the actual jobs reports shows more than 125,000 net new jobs created, therefore, look for mortgage rates to rise.

Markets will also watch for the monthly Unemployment Rate. After falling to a 4-year low of 7.8 percent in September, economists anticipate that October’s unemployment rate will rise 0.1 percentage point to 7.9%.

The Bureau of Labor Statistics releases the jobs report at 8:30 AM ET Friday.