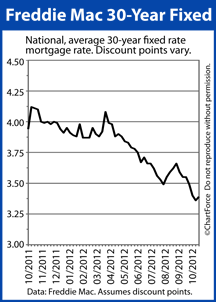 Mortgage markets improved slightly last week. With a dearth of new U.S. economic data due for release, investors turned their collective attention to the Europe, China, and the Middle East.

The combination of civil protests, economic slowdowns, and growing political tensions caused investors to dump risky assets in favor of the relative safety provided by the U.S. mortgage bond market.

This week, data returns to Wall Street as a series of housing reports are slated for release, in addition to inflationary reports such Tuesday’s Consumer Price Index (CPI).

Tuesday’s CPI may do the same.