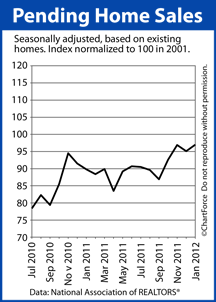 The housing market appears headed for a strong spring season.

After a brief setback in December, the Pending Home Sales Index resumed its climb in January, posting a 2 percent gain over the month prior.

The data puts pressure on Hooper home buyers. This is because a “pending home” is a home that’s under contract to sell, but has not yet sold. It’s tracked by the National Association of REALTORS® and, among all housing statistics, it’s the only one that’s “forward-looking”.

By contrast, the Pending Home Sales Index tells us what’s coming next.

January’s Pending Home Sales Index reading lifts the monthly metric to its highest level since April 2010 — the month during which the 2010 federal home buyer tax credit expired — foreshadowing a strong housing market through March and April 2012, at least.

This should not be news, of course. The nation’s home builders have said “foot traffic” is rising and home supplies are scarce nationwide. The only wild-card for housing is the high contract cancellation rate.

Despite contract failures, though, the combination of low mortgage rates and low home prices is enticing to today’s home buyers. Expect home sales to climb in the coming weeks which will lead to a strong spring season for housing.