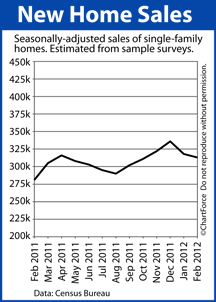 According to the Census Bureau’s monthly New Home Sales report, 313,000 new homes were sold in February 2012 on a seasonally-adjusted, annualized basis, representing a 1.6% drop from the month prior.

A “new home” is a home for which there has been no prior owner nor tenant.

At first glance, the data looks negative for the housing market; a suggestion that the well-publicized housing market recovery may be slowed. However, within February’s New Home Sales report are three important counter-statistics worth mentioning.

First, although annualized home sales volume slipped 5,000 units in February, this occurred as the number of homes for sale nationwide remained constant at 150,000. This is the fewest number of new homes for sale since at least 1993 — the first year that the Census Bureau tracked such data.

A second reason to remain optimistic on housing is that New Home Supply was 5.8 months in February. This means that, at the current pace of sales, the entire new home inventory will be “sold out” in 5.8 months.

And, as a third reason to look past the New Home Sales headline figure, last month’s reporting Margin of Error was huge.

According to the government, the February New Home Sales data was published with a ±23.9% margin of error. This means that the actual New Home Sales sales volume may have dropped as much as -25.5%, or may have climbed by as much as +22.3%.

Because the range of possible values includes both positive and negative numbers, the Census Bureau assigned its February data the “zero confidence” label.

It will be several months before February’s New Home Sales data is revised. Until then, buyers in Hooper would do well to take cues from the real estate market-at-large which shows steady, gradual improvement.

If your 2012 housing plans call for buying new construction, consider using February’s results as a window to “make a deal”. As the year progresses, great values in housing may be gone for good.