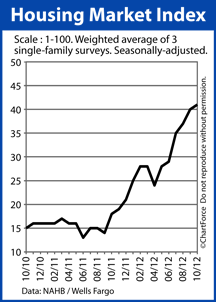 As home prices rise, so does home builder confidence.

Tuesday, the National Association of Homebuilders reported its monthly Housing Market Index (HMI) at 41, a one-tick improvement from September and the highest HMI value since June 2006 — a span of 77 months.

The HMI has not crossed 50 since April 2006 but the index has been making a run since last year, nearly tripling since the 14 reading of last year’s September.

In addition, builder confidence has climbed for six straight months.

When builders expect business to improve, they may be less willing to make concessions on price or product, holding home prices high and removing seasonal sales incentives.

This month, home builders are seeing strength in each of the three surveyed areas :

All three values are at multi-year highs but it’s the level of foot traffic that may concern today’s home buyers. Builders report foot traffic through model units to be at the highest rate since mid-last decade. This, combined with a shrinking supply of homes for sale, has contributed to a rise in new home sale prices and suggests even higher home prices in 2013.

Like most of the U.S. housing market, new construction appears to have bottomed in October 2011. One year later, the market looks stronger.