You are here: Home / Around The Home / Make Your Home A Movie Star! How To Rent Out Your Property As A Film Location 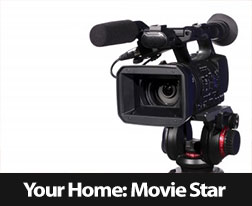 Whenever a scene in a film or television show takes place in a private home, have you ever thought about who owns that property? Well, it could be you!

The fact is that film and television production companies are always on the lookout for new locations where they can shoot their footage. If you advertise your property in the right way, your home could have its 15 minutes of fame as the set for a film or a television show episode.

Many production companies have been gradually switching over the last few years into filming at ‘authentic’ private properties rather than in film sets and studios.

You don’t have to own a stunning mansion or a historic property to rent out your home as a film location. Film and TV location scouts are looking for a wide range of different homes, from small condos to townhouses to log cabins and any other style of dwelling.

Turning Your Home Into Hollywood

Of course, the obvious advantage of renting out your property as a film location is that you can get paid hundreds and sometimes even thousands of dollars per day just for letting a film crew take over your kitchen or dining room. Also, you will have the prestige and excitement of being able to meet celebrities and see your home featured on the big screen.

However, the process may disrupt your routine for a day or two or possibly longer. The film crew might want to move furniture around and you might even find yourself having to move out for a while. If you need to stay in a hotel during filming, make sure that the amount you are getting paid is enough to compensate for the costs of accommodation.

If you think that renting out your home as a film set sounds like a good idea for you, there are a number of different websites where you can list the property and post photos.  Sometimes your real estate professional can help refer you to a specialist in the local area who consistently works with location scouts and producers.

When you are making the arrangements, make sure that you draft up a contract that states your fee, how long the filming will take, the type of production and an agreement to return your house to the original state that it was found in.

If you are interested in purchasing a Hooper home that could be film-worthy, please give us a call!